Whites is starting to compete in the marketplace of Pulse Induction instruments and they made a Superb detector.

We bought this new from our local reseller and took it out on a trip to a secret location in the mountains of Arizona where we put it to the test.

From what I read about pulse induction is that is works best in heavily minerized ground because it uses the iron/black sands in the ground as a catalyst to go further down. It does this by sending electromagnetic pulses into the ground in which the ground creates a magnetic field around gold. The detector somehow makes sense of this technique to find targets. It is completely different technology than a VLF detector. Drawback is that by design, it does not detect small bits of gold. 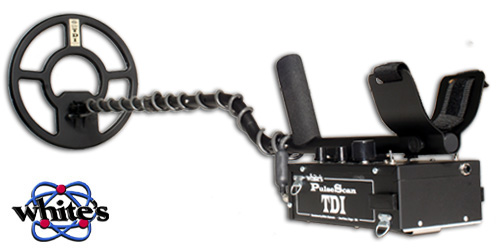 There is a special way to tune the knobs according to how minerized your soil is and since the ground had a lot of iron in it, we had to turn up the ground balance to 8 1/2. You should always hear a constant stable sound emitting from the speaker. If the sound starts to fluctuate then you need to use the Frequency knob to stabilize it.

We scanned the ground while listening very carefully. There was a very faint beep when going over a quartz rock protruding from the ground. So we scanned it several more times to make sure. Yep, something was there so we started picking at the ground and breaking it up. It was a quartz vein which was just the tip of the iceburg.

After we got a few hand-sized chunks of quartz rock, I saw it had some black sands mixed together in it which means that a VLF would have thought it was just another metallic target. I brought it over near the truck and used the Lobo SuperTRAQ on it.  I was starting to get excited, but I was cautious to not let my hopes get the better of me. We threw it all in a 5-gallon bucket so we can take it to our nearest gold prospecting dealer for further analysis.

Couple days later we went to the dealer and got it tested with their gold spot detector which is designed for finding small veins or fine grains of gold.

Their spot detector was finding small traces of gold in some random samples from the bucket. Wow! Everyone was starting smile as they gathered around while testing more rock samples. Even though it was small bits of gold, they were actually amazed that the Whites TDI detected it. Its probably because there was enough gold concentrated in certain spots inside the quartz rock just big enough to be detected.

Later on we took the ore to get it fire assayed and it surely had gold in it!

What a happy day. Our first time out using the Whites TDI and we found gold!

This pulse induction detection instrument is designed to go deeper and go past all the ground minerals in which would otherwise stop a VLF.  I am very please with this device and would recommend it to others. I feel like I’m no longer wasting my time searching for gold.